DISCLAIMER: The manufacturers of the products mentioned on this site make no medical clams to cure anything. The  information on this site is not meant to substitute the advice provided by your own physician or other health professional. It is for informational purposes only, and if you have any specific medical problem you should contact your medical advisor. Anyoneforhealth.com is not liable for any direct or indirect claim, loss or damage resulting from the use of this information.
FTC Disclosure: You should assume I may receive a small commission if you decide to purchase any products recommended on this site.

You cannot order  anything from this  site. It is for information only.

However, if you click on the links provided you will be
re-directed to the product
website, and for the sake of
complete transparency you
should be aware if you purchase anything via my links I may possibly be  compensated for the
referral .

Any opinions expressed regarding the efficacy of the products are based on my own personal experience and should not be construed as proof they will work in the same way for anyone else.

Please also read the
Disclaimer at the foot of
the page.

True story books about an autistic child
and mercury poisoning

This compelling  true story which will have you both laughing and crying. Incredibly easy to read books containing photographs and poetry provide a fascinating, funny and insightful account of living with an autistic child.

Written by his mother but much of it told from Jodi's perspective, his story will really help reassure people about autism, and mercury poisoning.

Jodi had a very self restricted diet. After developing regressive autism he would only eat things that were round and beige or brown.

Now, using  Seagreens® and In-Liven probiotics on a daily basis, his parents are convinced that daily optimum nutrition from the small amounts of balanced natural vitamins, minerals and vital nutrients  is the key to his good health.

"I loved this book (I'm Not Naughty - I'm Autistic), from the attractive front cover right through to the "rules" (some of the best I've seen), the poetry and the photographs. Writing as Jodi was an excellent idea and really makes people understand (about autism), better than writing about Jodi.
I do hope that it will become widely read." -Zelda Landau, Director,
Light and Sound Therapy Centre, London

Autism Amalgam and Me

Guaranteed to make you think, this often humorous, informative

Jodi had high levels of mercury poisoning and improved considerably

Jodi's mother suffered worrying health problems due to her dental amalgam fillings. After detoxification of mercury and other heavy metals, with Humet-R, safe replacement of amalgam and a continuous nutritional protocol including daily Seagreens® seaweed natural multivitamins and In-Liven probiotics, she is once more enjoying remarkably good health.

Mercury Poisoning - It’s Not In Our Heads Anymore

Read this book to discover why Jean thinks Jodi’s autism is linked to mercury, and learn how dental amalgam fillings almost destroyed the lives of several other REAL people including Pam Clayton and Pam Tootal.

Learn how they used Humet-R to chelate for heavy metals and why they believe this amazing product saved their lives.

Another book which is really useful and which exposes the link between learning disabilities, the food and drink that we take and the condition of our digestive systems is Gut and Psychology Syndrome

connection between psychiatric and neurological disorders

optimise health especially for those suffering from autism.

The late Dr Jack Levenson was the President of the British Association of Mercury-Free Dentistry and was one of the world's foremost authorities on this subject.

During 2000 Dr Jack Levenson worked with Seagreens Limited to develop Seagreens® Food Capsules which were successfully introduced for use as an amalgam detox remedy the following year at The Brompton Dental and Health Clinic in London where Dr Jack Levenson had an advisory clinic.

Dr Jack Levenson's experience is based on his own observations of over 6,000 patients. 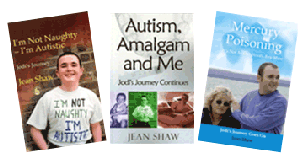 Toxic Tooth Talk: Is There A Link Between Mercury Amalgam Fillings And Your Health? A Self-Help Book

Pam Clayton is a survivor. When health issues associated with mercury poisoning caused by her dental amalgams turned Pam's world upside down, she didn't talk about ALL of her symptoms because she was worried people would think she was a hypochondriac. Some had already suggested it was "all in her head". Pam knew it wasn't though and sought to find the answer. When she finally discovered what was wrong with her, Pam went on to not only cure herself, but set up a help line to assist the thousands of others also affected by this invisible toxicity, which mainstream doctors and dentists are reluctant to admit even exists. Toxic Tooth Talk not only covers Pam's mercury poisoning, but other true stories, symptoms, therapies,therapists and help lines. If you're about to visit your dentist for treatment... ...read Toxic Tooth Talk first!

It's All in Your Head: Link Between Mercury Amalgams and Illness

Mercury is one of the world s most poisonous substances, and yet dentists routinely use it in amalgams to fill our teeth. Forty years ago, Dr. Hal Huggins questioned this practice, and now legions of dentists, researchers, and citizens are adding their voices of concern. "It s All in Your Head "looks at past research on mercury toxicity and dental amalgams as well as current scientific findings that can no longer be ignored. It describes the possible effects of mercury toxicity, including multiple sclerosis, Alzheimer s disease, Hodgkin s disease, Chronic Fatigue Syndrome, and virtually all autoimmune disorders. Written in easy-to-understand language, "It s All in Your Head "explodes the claim that mercury amalgams are safe. If you think your worries are all in your head, you may be right."

This book is a "Must Read Book"; especially if you have dental fillings. You must have heard of the heavy metal 'Mercury' (Hg), its containers carry a badge of the ‘Skull and Crossbones’ emblazoned with the word 'POISON’ across it Would you believe it's quite possible you could unwittingly be carrying this ‘Silent Killer’ around with you in your mouth? By reading this book you will learn of the symptoms, also find out about the horrendous mind blowing effects to the human body leaking fillings can cause. The author of this book has almost fifteen years experience researching the effects of poisonous heavy metals, toxic metals like Mercury and Lead, which attack the human blood stream and digestive system. It is a possibility this book could save your life. Read it now and act on the information, before it’s too late!

The authors of these two books - Toxic Tooth Talk and Mercury The Silent Killer are both featured in my third book - Mercury Poisoning - It’s Not In Our Heads Anymore and I can highly recommend both.